…Monday’s San Diego Tribune had some attention grabbing headlines.  Yes, certainly Sheen and Qadaffi got their ink this morning.  But on a 72 degree spring day in San Diego the newspaper/blog caught my eye with summertime themes. 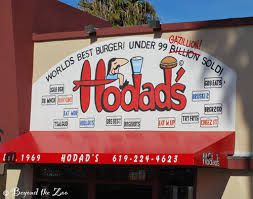 This website has hosted a heated discussion of  “San Diego’s best burger.”  There doesn’t seem to be a clearcut consensus among the perennial favorites like  The Waterfront, Rocky’s, Nicky Rottens  or the hot chains like In and Out and Five Guys.

Can you trust the media to choose San Diego’s best burger?

Hodad’s got famous a few summers ago when Food Network showed up at their Ocean Beach location to tape an episode of Diners, Drive ins and Dives.  The show is based on   filming  places with great food, funky atmosphere and unreal portion control.  Hodad’s fits the bill.  And you won’t get any disagreement from this realtor that Hodad’s has a great burger!

Today’s  Union Tribune heralds the opening of Hodad’s at the corner of Broadway and 10th.  It’s going to be  a great place for pre and post Padres game eating.  Opening in the nick of time.  Let us know what you think?

Humphrey’s on Shelter Island is a little oasis that has been enjoyed by San Diegans for decades. 30 years ago Humphrey’s was a little Polynesian themed hotel in a quiet corner of San Diego bay.  Then a hotel manager decided to host concerts on a courtyard shuffleboard court.

In the ensuing years, Humphrey’s has become a noted location for Jazz, rock and country.  Today’s Union Tribune posted Humphrey’s schedule for 2011.  Look for favorites from Lyle Lovett to David Sanborn.  Back for another year with an intimate audience and a “flotilla” of  gate crashers on kayaks, surfboards and canoes.  If you don’t know about the non paying concert goers, you owe yourself an evening this summer at Humphrey’s.